Granted this place is not for everyone…

• You sleep on wooden bed in a wooden hut
• You have to walk to the composting toilets in the dark
• You have birds flying into your cabin through the cracks above the door to wake you up
• Room service is nonexistent – you have to first make a fire and then make your own breakfast…oh and did I mention you need to get water from the well first, taking care not to disturb or displease the fairies who watch over the well?
• You have no showers, baths or running water of any variety. If you need to wash, you do so in the stream or throw yourself into the lake
• Oh – and visit in winter and it is cold…so, so cold. So to warm yourselves up you light a fire… But did I mention you first need to chop the wood yourself?

All the above are reasons why this place is so, so, so incredible. Given that it is a living nightmare for so many people – you’re guaranteed to only stay with like-minded people who love the outdoors and relish every moment with no mobile signal and no electricity. It’s one of my most favourite places to stay of all time…and I did so whilst suffering from raging flu! I dream about this place night and day and I am frantically plotting when I can return.

It’d be wrong of me to write a review and not mention how fantastic the camp managers and guides are who operate out of Kolarbyn. They are so friendly, welcoming and knowledgeable – they’ll advise you on the tastiest mushrooms to pick from the forest, identify the best places to see wildlife and will share their lovely warm coffee with you when you wake from a very late lie in. Bliss!

We’ve been receiving quite a lot of requests for advice about African safaris recently, which has inspired me to reshare links to our trip report for the Kgalagadi Transfrontier National Park in South Africa.

We initially wrote this trip report as a HUGE thank you to everyone on the SANParks forums for their fantastic advice and support when we were planning the trip -without them this would not have been a trip of a lifetime. I urge you to join their forums if you’re planning a trip – their enthusiasm alone will have you counting down the days until your holiday starts 🙂 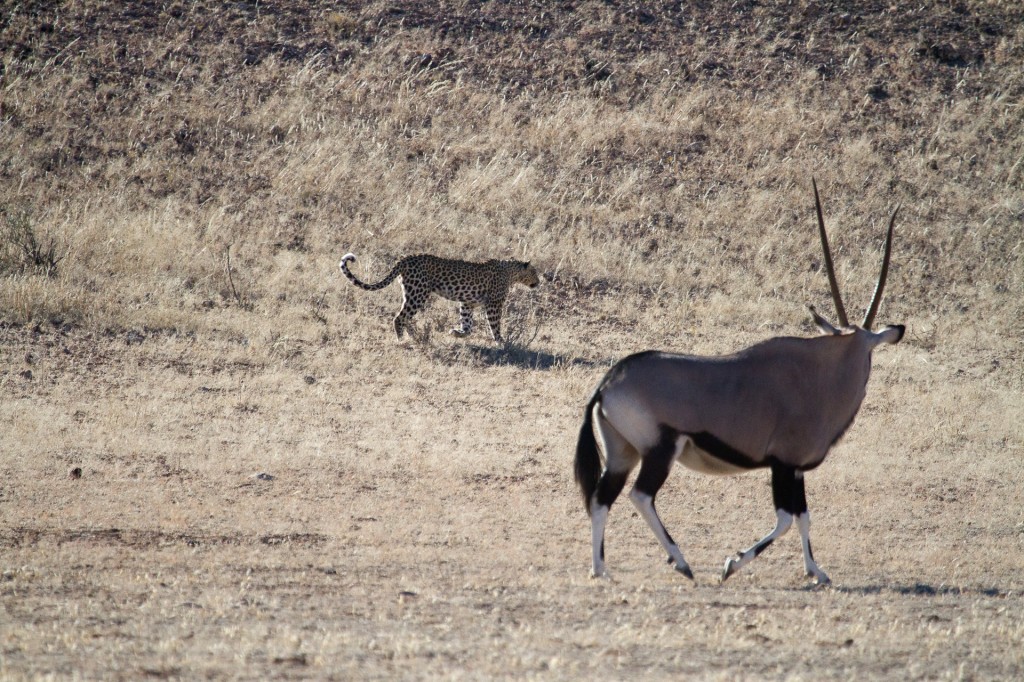 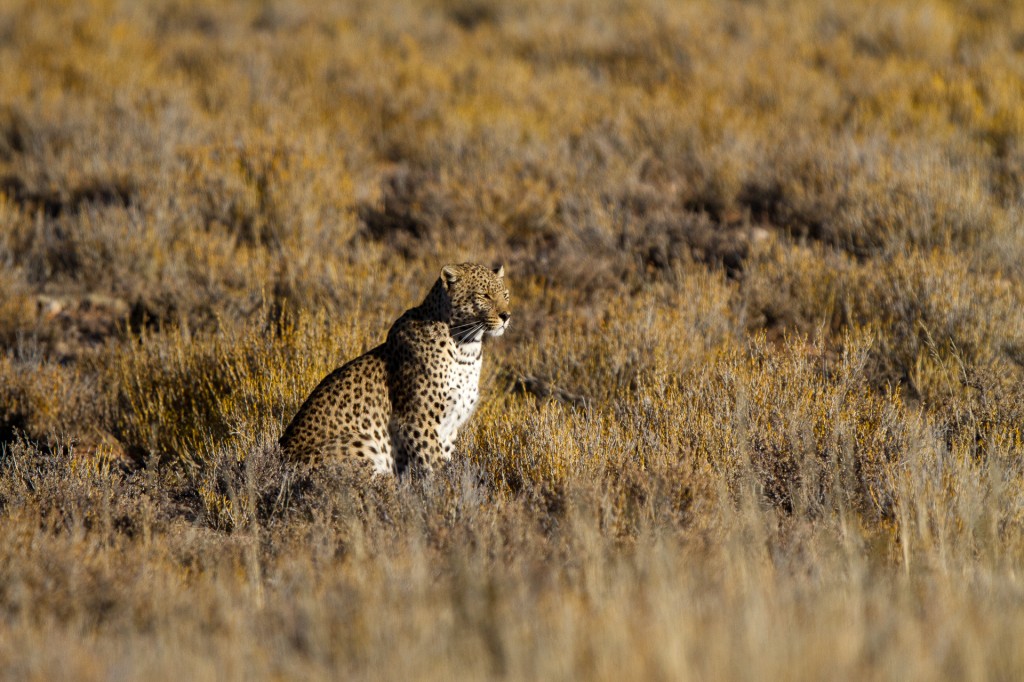 Last year, in Kgalagadi National Park we had some pretty jaw dropping leopard sightings. We shared two of our experiences with the Kgalagadi Transfrontier Park Leopard Project and were delighted this week to find out more about the leopards we saw and their offspring who are now exploring the vast plains of Southern Africa.

From the candid snapshots shown in this blog, the mating leopards were identified as the Auchterlonie female and Dakotah. This sighting from June 2012 would suggest that Dakotah is the father of young Warona who the projects estimates was born in October 2012 :).

The second sighting on day 7 of our trip is likely to be Miera, a young female.

The project uses public sightings of leopards identified through their unique spot patterns. They track the leopards and use the sightings to help estimate the population and to investigate range sizes. Please submit any leopard sightings from  Kgalagadi to their website http://www.ast.uct.ac.za/~schurch/leopards. From a couple of our candid snapshots, the leopards were confirmed as

The full sightings are detailed in the following Taraji Blue trip reports:

Photos from our trips to Africa are available to view on the Taraji Blue online photo gallery.

Meet a Montezuma Oropendola, they are, quite simply, one of the most impressive and incredible birds that I have had the pleasure of spending time with. Not only are they a joy to look at, they are also incredible to watch.

The thing is, you hear them before you tend to spot them. Despite them being quite big birds, it’s not their bulk which attracts your attention in the treetop canopy, it’s their many display sounds which range from the crackling of sheet lightning to the most bizarre gurgling, all of which is designed to attract females.  We were fortunate enough to be in Costa Rica during their breeding season and we spent many a happy hour in our treetop cabin watching their elaborate courtship rituals which involve the male swinging forward on the branch to display his beautiful yellow tail feathers whilst gurgling as loud as he can. Heck – even I was attracted – this is seriously attractive stuff! However, I was not the intended audience, and if the display is not up to scratch, females will choose to mate with a superior performer. The stakes are high!

Costa Rica is a truly amazing country, and if you get the chance to visit I urge you to do so.  Photos from our trip are available in Taraji Blue’s Costa Rica photo gallery. If you’re planning a visit you might find my trip reports of interest at https://blog.tarajiblue.com/region/travels/costa-rica/

Hypno-Toad, a Crazy Storm, Johnny Walker and The Milky Way… not the usual way to celebrate ten years of marriage, but it was certainly memorable and I would not change it for the world.

Our ten year wedding anniversary plans changed at the last minute – we were supposed to be watching Atlantis take to the skies in Florida, but the shuttle flight was rescheduled and we were therefore lumbered with a return flight to Florida which we had to take. We therefore took the flight and then connected at last minute to San Jose in Costa Rica – a move which was largely last minute, but became one of the best travel decisions we’ve made.

Counting the pennies, we booked ourselves into largely cheap and spartan accommodation – but refused to compromise on views and experience. That’s how we found ourselves in a tiny one bed hut on the hills surrounding Arenal Volcano on the evening of our tenth wedding anniversary. After zip-lining through the rainforest that afternoon we’d settled on a nice steak in the restaurant that evening,  followed by a whisky on the plastic, rickety chairs outside our accommodation. As the sky blackened, we were treated to a welcome cool breeze and the distant sound of thunder. As the temperature  dropped, huge cane toads emerged from the undergrowth and gathered around our feet, their frantic burps never failing to shock me out of my seat. Shining the torch on them illuminated their yellow eyes in a hypnotizing and enchanting way – I felt myself crawling closer and closer to them to try and take a picture, only to run screaming as they hopped fearlessly towards my face. As the toads were largely winning the battle, I decided to head off in search of armadillos and bats – finding both, literally, on the doorstep to our hut. Feeling very happy with myself, and after a few trips back to the bar to restock my ‘lemonade’ (ah hem), we started to set up the camera to take some timelapse and video, as well as capture some astrophotography.

The views were out of this world. The clouds parted and about 1am we were treated to a totally clear sky above the volcano. The Milky Way was visible with the naked eye and all around us stars twinkled like fairy lights.  This was one of the first times I had ever seen the night sky so clear. I was transfixed and in love.

After many hours studying the typography of the region on the internet, and scouring over local maps, we had chosen this specific accommodation because we knew there was no towns, hills or accommodation directly between us and Arenal Volcano, therefore we knew that light pollution would be at a minimum and the landscape ideal for some nightime shots.

I love this image, but cannot take any credit for this. This is all Alistair’s hard work. It captures the view we had perfectly that night – the only omissions are the streaks of fork lightening as they bounced off the sides of the volcano, and the thunder bolts which vibrated through the ground like after shocks.

Ali would say that, technically, this is not a great starscape – that he left the exposure running for too long (101 seconds) and because he was so captivated by the open skies he didn’t re-take this view, but I love it – brings back very fond memories.

Additional images from our time in Costa Rica are available in our Taraji Blue photo gallery. We welcome your feedback and comments.

If you’re planning a trip to Costa Rica you might find our Costa Rica blog of interest – it contains detailed reviews of trips and routes to take and the accommodation available.

To keep up to date with our latest blogs and releases, why not follow us on our Taraji Blue facebook page?