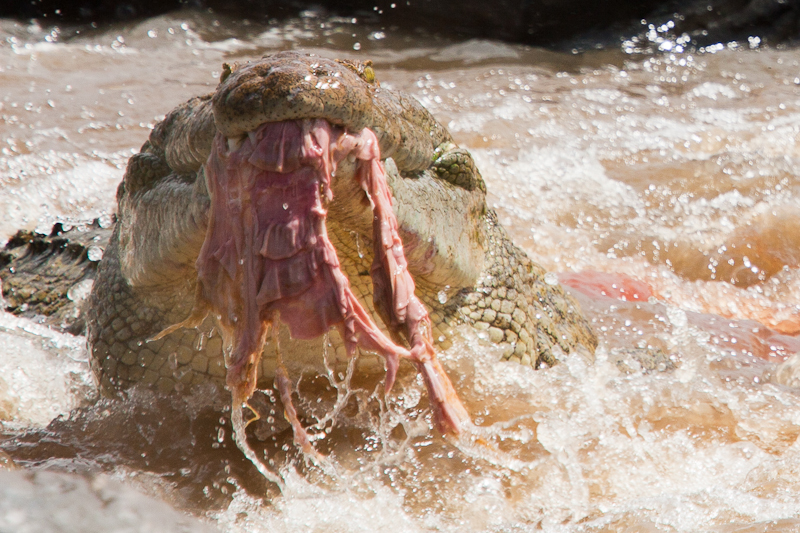 Following the gluttony of the Great Migration river crossings it is usual practice for the crocodiles to store their prey under the water.Secured by rocks and crevasses in the river bank, the underwater caverns act as refrigerators.

Contrary to this practice one must wonder if, on this particular day, the crocodiles had a particular appetite, for the kills were left floating in river. Carcasses bounced from jutting rock to rock, occasionally coming to rest on a lazy hippo’s back. Wildebeest horns would jut from the water, legs floating independent of bodies as the crocodiles tore into the flesh. 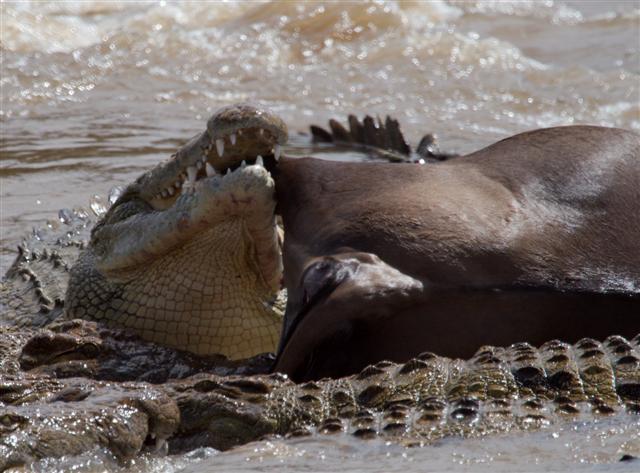 However, it’s a more sedate affair than one might imagine. Despite the reputation of the crocodiles, they work together as a team.

Their little arms are useless limbs left flailing, so the crocodiles use their teeth to grab opposite sides of the carcass. Twisting in the water they rely on a masochistic synchronised swimming exercise to tear flesh from bone. There’s no infighting or struggle – there was simply too much meat to go around.

Privileged to spend eight nights in the Maasai Mara in October 2009, we relished the opportunity to revisit our land of dreams.

Ever since our first visit to Kenya in 2005 we’d fallen in love with the continent and had longed to return. For four years we’d played our Africa CDs daily and viewed our photos longingly, anticipating the day we would return. Back in 2009 we had our chance…

Each morning we bounded out of our beds and into the wilderness, eager and hopeful of what the day would bring. We owe much of our success to the fantastic guides and staff of the Kicheche Bush Camp, Mara Safari Club and David Sheldrick Wildlife Trust, who we cannot praise enough and to whom we long to return.

It is through our experiences and time in Kenya that we tell, and re-live, our memories of this amazing continent, and above all, of the Maasai Mara.