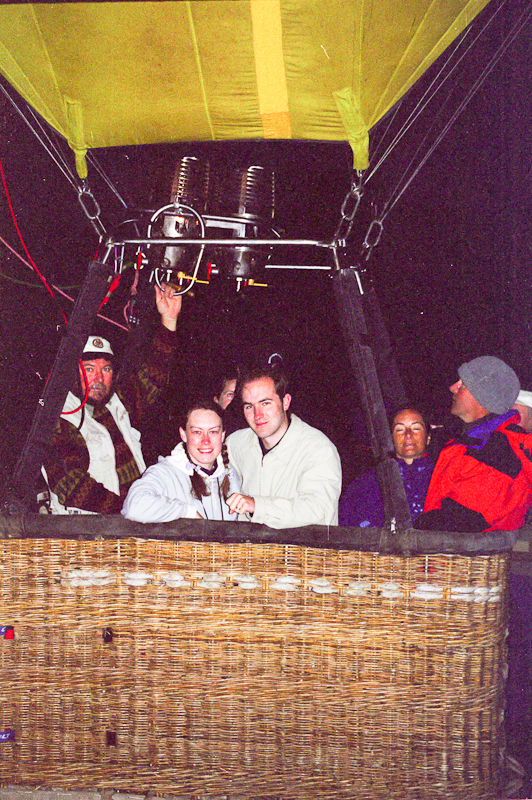 We have recently celebrated our tenth wedding anniversary with a trip back to South Africa – the location of our honeymoon back in 2002.  I thought I’d take a trip down memory lane today and relive my first experience of South Africa – and reflect upon it ten years later as an older (and wiser?!) safari -goer.

Lets start with an embarrassing photo of Ali and me on honeymoon, looking like the babies we were back then. This is us on a morning balloon ride over Hazyview in Mpumalanga. It was my first time in a hot air balloon and I was a wicked combination of  a nervous wreck and ridiculously excited. Unbeknown to me, the balloon flight was subject to aircraft type controls and before I boarded I was given a boarding pass and informed of the emergency exits (!!!) The dawn flight gave us an incredible birds-eye view of Mpumalanga as we soared over rivers, valleys and hills. The landing was less serene and a lot more bumpy – we attempted to land on the back of a truck (!) .. but the champagne on arrival eased my jitters somewhat 🙂

What a fantastic welcome to Africa!

The next few days we did a combination of morning and afternoon game drives in Kruger. It was my first time on safari and I was beside myself with excitement. Before we’d even stepped foot in Kruger we’d had a hippo visit our balcony in the dead of the night and I’d been endlessly amused by the signs around our lodge freeing the management from any liability of the on-site crocodiles and loss of body parts or any deaths that might occur.

Upon entering Kruger National Park at dawn the next day we were welcomed by a herd of giraffe on the horizon – it immediately reminded me of Jurassic Park. That day we were treated to sightings of cheetah, lion, elephants, monkeys and hyena. The latter became my absolute favourite… 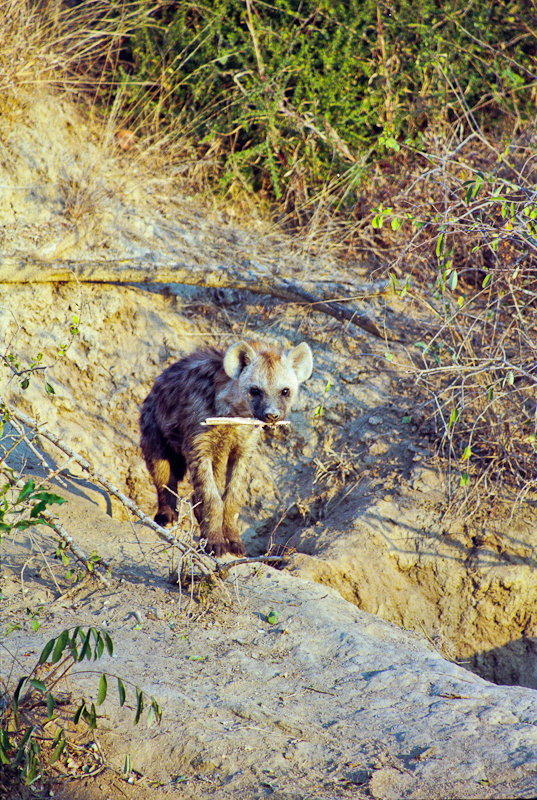 ..Late afternoon we stumbled across a hyena den, the mother was absent and the cubs were incredibly curious. One wee fellow (which I named Ed) amused himself for 30 minutes with a single stick – trying desperatly to enter the den with it in his mouth but blocking his own entrance time and time again. Thankfully my giggles did not deter or distract him from his efforts and my heart went out to the wee guy.

However, it wasn’t long after that ‘Ed’ realised he had an audience – a prospect much more interesting than his stick. He ambled over to us, the glorious golden light of late afternoon casting an angelic light around him. He jumped up to place his paws on the back of the vehicle for a closer look – we were almost nose to nose. I kept having to remind myself this was a vicious wild animal, not the cute and cuddly teddy-bear he was pretending to be.

Whilst on our very first safari together an endless source of amusement for us was the playful vervet monkeys which were everywhere. Any attempt to enjoy a picnic and keep your food to yourself was futile. Your attentions would be temporarily diverted as one monkey would distract you and meanwhile another thieving paw would be rooting in your bag for tasty treats. As safari newbies we lost many items of our lunch – bananas, yoghurt and juice – and were lucky to retain our cameras.

Our time in Kruger was the start of a new obsession for me – I’d discovered a new world, one full of incredible wildlife, heart stopping sunsets and the most generous and friendly people I had ever met. I knew we’d be coming back!